As of November 9, 2018, there are fires developing in Southern California in the Ventura County area. If you are relocating your residents, please contact your Regional Office to provide information about where you are relocating to and provide your census.

Below is a list of evacuated Adult and Senior Care facilities and the location of the residents updated as of 11/10/18 at 10:00 am.  This information is provide to assist you with locating your family or loved ones:

Below is a link with facilities that have indicated they have beds available. Please work with the contact on the list to see to see if their availability is appropriate for your residents.

Recently my client wrote this article on how she interviews the silver generation. In any assessment with a client or potential patient, you often end up listening more than you do speaking to get the information you need from an individual possibly near dementia or consistent confusion. Read consumer-focused article on: How to interview…on Pages to the Past.

Consider your subject is placed in a setting, whether it be a home or office. Are they comfortable, and receptive for the duration of your discussion? Is their condition, ailment, or disease a potential barrier to your interview? Here are some considerations first to account for his or her medical or health needs:

What other considerations would you add? We’d love to hear what people in the industry are doing to successfully communicate with those receiving treatment. If you check-in clients, conduct assessments, patient interviews, conduct medical research studies, share your expertise below in the comments.

Released by the White House Conference on Aging Council: 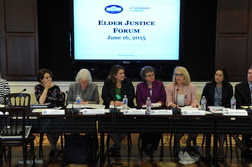 The President designated Monday, June 15, 2015 as World Elder Abuse Awareness Day, and he called on all Americans to observe the day by “learning the signs of elder abuse, neglect, and exploitation, and by raising awareness about this important public health issue.” Elder Justice is one of the four main focus areas of the 2015 WHCOA, and Executive Director Nora Super marked the day by speaking at the First World Elder Abuse Awareness Day Global Summit. According to Super, “Every year, millions of older adults around the world experience abuse, neglect, or exploitation. While elder abuse statistics are staggering, behind every number is a mother or father, grandmother or grandfather, husband or wife, neighbor or friend.”